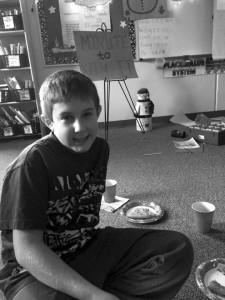 He was a mystery baby meaning we did not want to know the sex, unlike our first son, and on a Monday in 2003 the unknown became known. Ryder entered the world and I did my best impression of Molly Shannon’s “Superstar” right there in the delivery room. No lie!

He is completely opposite his older brother and if I thought raising him would be the same he quickly made it known that was a silly expectation. Whereas his brother will question the logic of everything with a lawyer’s wit, Ryder does what he is told to the letter. He believes there is always a possibility for everything despite what we might say which drives me crazy but gives me hope.

He marches to his own beat. The One Shoe Bandit we call him because he would always just have one shoe or sock on and when we asked him why, he would respond, “I am Ryder”. That sums it up perfectly.

He is Ryder, my little boy who is still little, who still believes in Santa even though this Christmas might be the last. My little boy who is my moral compass, who always reminds us to say Grace, who does what is right and will not remain in the company of those who do opposite. He plays football, basketball and baseball and will take you down in Black Ops everyday of the week and twice on Sunday.

He will whine and complain every minute he has to do homework or chores but is ready to help you if you need it. His favorite sports figure is JJ Watt which is why he chose 99 for his jersey and he will live and die by the UT Longhorns and Cedar Park Timberwolves. He does not take risks yet ends up in the ER more than anyone in the family. He looks at the world through a “Capra-esque” type of lens, like his father still does, and I hope that never changes.

This site uses Akismet to reduce spam. Learn how your comment data is processed.